Election 2016 Exposes the Media as Fraudulent 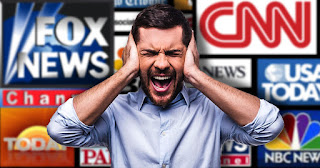 Nauseating has been the operative word for this election season. However, the one aspect of the season that is more than sickening is the fact that we can no longer trust what we see or read in the media anymore. There is too much coziness between the media's parent companies and presidential campaigns. Even the on screen talent and beat writers become "too familiar" with the candidates and their staffs. There is no wonder why the words "shill" and "rigged" are being thrown around so much this year.

Jordan Chariton, from The Young Turks Network and Mediaite, has painstakingly filtered through WikiLeaks for all the evidence illustrating that the mainstream media has descended to an aid to the powerful instead of the noble entity it once was.

Traditionally, the role of media has been to keep us informed and remain the watchdog over the authorities and ruling class. Today media follows a different model. For the most part it merely echoes the opinions of the elite.

In an article that Chariton wrote for Mediaite, he exposes the media bias for Hillary Clinton while covering the presidential election. In a section concerning CNN Contributor and DNC Chair Donna Brazile, he shows how she played an integral part in the campaign's “media division:”

"Brazile is joined by a long list of phony 'analysts' and 'strategists'—as well as anchors and reporters—who were clearly in-the-tank for Hillary Clinton all along . . . Brazile and those like her do what they do best: scheme to help get, and keep, their friends in power, and then go on TV and pretend to be on the level, offering their expert “analysis” on the same people. Does this make Brazile and other pundits bad people? No. But does it expose the platforms they operate on completely and utterly fraudulent."

This just isn't crooked, it is a cancer. We turn on the news and hope to get the unvarnished truth so we can make decisions about our lives. However, when I turned on MSNBC's Morning Joe this morning I saw a panel talking about how the WikiLeaks have nothing troubling for the Clinton campaign. They cited an email that talked about general campaign strategy when the panel said nothing of the numerous emails that show a direct cooperation between the Clinton Campaign and their PAC's, for example - which is explicitly illegal.


This isn't meant to be an anti-Clinton rant.  No, not at all.  Clinton, Trump, and those who follow in the elections that have yet to come, will emerge and fade away.  This post is about something much more significant than who becomes the president in the remote year of 2016. The most frightening part of this election season is that we have discovered that we are manipulated into thinking whatever the mainstream media, and those who pull their strings want us to believe – true or not, in order to advance the corporate establishment agenda. Since this seems to be the model now, there is no reason to think that we will ever be able to count on knowing the truth about our world. We are now, and will undoubtedly continue  to have the "blue pill" shoved down our throats.

“When the people who control the political power in this country . . . can rig the media, they can wield absolute power over your life, your economy, and your country. They control what you hear and don’t hear, how its covered and even if it is covered at all.”

Open Memos to the Clinton and Trump Campaigns

We understand that the probability of  hacking into our national emails is problematic. We also understand that the troubling content of those emails paint a Jekyll and Hyde candidate. It also paints a campaign and political party that are not above collusion and dirty methodology. We have the ability to consider both of these issues at the same time and consider them separately. Please stop insulting our intelligence and pretend that we can't or shouldn't. 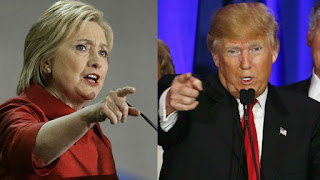 The American people don't deserve either of you, but apparently you deserve each other.
at 8:33:00 AM No comments: