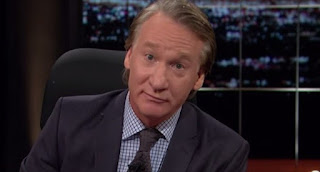 I am sure that Bill Maher tries to be on the good side of issues, but he seems to not be a deep thinker - only bein able to analyze the top layer. His "New Rules" in his recent show is an example. His thesis was pointing out that the people who refused to vote for Hillary in the election were idiots because Trump is a lot worse - as if anyone didn't know that would be the case before the election.

What Maher doesn't get is that those with progressive leanings refused to consider the "lesser of evils" mentality in allocating their sacred votes. If we go though our lives making decisions based on the lesser of evils, we will find ourselves never selecting the good.

Not only did progressives not want to vote for the lesser of two evils, they hope that if Trump did win, that perhaps people could see the consequences of their choices. However, they perhaps gave Democrats more credit than they deserved. Hillary and her followers refuse to look in the mirror concerning their failures. Instead they choose to blame FBI Director James Comey, Bernie Sanders, Jill Stein, and even - if you can believe this, the media. I am not one to defend the media, but my gosh . . .

So yes, Mr. Maher, you are correct. Hillary would have been a better president than Trump. Everyone knew this in advance. However, you have completely missed the plot. There are many progressives who care more about winning the war than they do about winning a battle - even if a battle is very consequential.

The Democrats, using sleazy tactics, were hell bent on coronating a bad candidate that had no message. Those tactics, when exposed, cost a number of DNC employees their jobs and put the DNC, itself, into court. There is no wonder this had a lot to do with disqualifying their party and their candidate in the general election to a lot of people. The lesson learned here is that selecting a president doesn't start in the first week of November; it starts in late winter.

The moral of this little tale is this: If Democrats didn't want a Donald Trump to win the presidency, they shouldn't be hell bent on nominating someone who can't beat him. Mr. Maher, if you could just peel back your sanctimonious onion another layer, you could have easily seen this. Maybe at this point of your life, for a number of reasons, you are not capable of doing that (insert your own pot joke here).
at 9:32:00 AM No comments:

However, I applaud those who feel compelled to stand up for issues that they believe in.  The March for Women is relevant today because the threat that many people feel from Mr. Trump in the area of women's rights and dignity.  These type of demonstrations, rallies, and protests are as much a part of this country's make-up as the inauguration and the peaceful transfer of power.

I do have to say that if your protest is centered on "Trump is not my president," I believe you are in error. Here is why. For eight years, we had similar reactions from the right.  We had people pushing forward the idea that Barack Obama was not a legitimate president.  It did great damage when a cluster of Republicans, led by Mitch McConnell, was meeting at this time eight years ago saying that their number one concern was to make Obama a one-term president.  It was outrageous then, and guess what; it is outrageous now.
You demonstrate against the legitimacy of the Trump presidency for what purpose?  To send a message?  To who?  Trump doesn't care.  He and his supporters just do their version of the chant student sections at basketball games do in response to criticism of the other side:  "Scoreboard!  Scoreboard!"  That indicates that you can whine or mock all you want to, but it doesn't affect the score of the game.  So I ask those who challenge the legitimacy of the Trump presidency, to what end?

Let me encourage you instead to do this:  Keep fighting, but fight for the right things!  Fight against prejudice.  Fight against social and financial injustice.  Fight for policies that benefit ALL Americans. BUT PLEASE, don't fight against our constitutional system.  Don't be the voice of obstruction no matter the issue.  We had obstructionism far too long and it will never stop if progressives don't take the higher road.

It is now imperative that good Americans not wash our hands of the constitutional system that we have lived under since 1787.  It is our job to hold our politicians' feet to the fire and make sure they work for us - whether that is Donald Trump or the congressman in most remote district in the country. Don't copy the GOP and be the party of "No."  Instead, be the party of "Let's Go!"