UPDATE: Trump Not As Smart as We Gave Him Credit 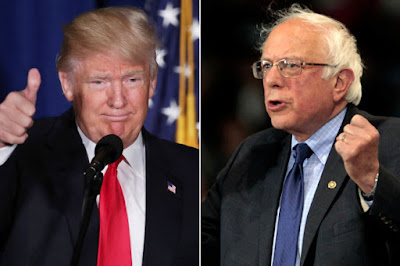 Just when we thought we had Donald Trump figured out, he comes through and confirms what many have accused him of being this entire primary season - just a blow hard, and a lucky one at that.

Relation State, on careful analysis (as seen in the original article below), determined that there had to be some genius to Trump, despite his appearance of being a pompous, policy vacant celebrity.  However, after having a brilliant strategy come to fruition, he backed out like a typical flip-flopping politician that listens to too many advisers.

The reason Trump gave was that it wasn't appropriate to debate the second place finisher in the Democratic Party.  What paints Trump as dishonest (this time) is that nothing has changed in the Democratic primary situation in the last 24 hours when he agreed to the debate.  It is a cop-out explanation.  What makes that position worse is that he took a leap in the debit direction on ALL four of the reasons that made debating Sanders so brilliant in the first place.

By not debating, he gives up the opportunity to 1) use his leverage to fashion the debate for his maximum benefit, 2) have a huge, national audience to watch him slam Hillary Clinton, 3) up his PR by raising money for a good cause.  Now that he has painted Bernie as the loser despite Trump's position that the Democratic primary was rigged, he now puts himself squarely INSIDE the establishment with the rest of the "Hillary has already won" crowd.  Doing that takes Trump out of his inside position to 4) court Bernie's followers.   By slamming the door in the "Bernie has already lost" fashion, he lost his chance to woo them.  He may have even made Hillary look a lot better than she did.

Perhaps this thong sandal of a decision shouldn't be surprising since he has changed positions on just about every issue that he has initiated.  It can only be assumed, like his other positions and proclamations, his agreement to debate Bernie Sanders was "just a suggestion."

However, Donald Trump didn’t get where he was by always doing the obvious or the safest things.  He somehow has a foresight often missed by the workaday pundits that you find on cable news channels.  The master of the greatest show in politics always seems to find the unconventional way to get ahead.  This time is no exception.

What is so genius about this debate for Trump?  There are four main components that will give him a great advantage in the fall.

1. He can forge the rules to give him the maximum benefit.  Trump has all the leverage in this deal. Sanders would have to give in to just about every demand because he needs the debate; Trump doesn’t. He has already demanded that the purpose would be to raise money for women’s health agencies.  Trump could also demand that neither participant engage in personal attacks on EACH OTHER (I emphasize this with great intention).    Sanders is inclined to play that way anyway.  With this, Trump ensures that Sanders doesn’t go after the “Trump is a bigot” tack which is Trump’s biggest weakness – as the demonstrators at his rallies continue to point out.

2. Trump gets the opportunity to slam Hillary Clinton for two hours in front of a national audience – probably a YUUUUGE one.  Trump and everyone else (except Sanders and his supporters) believe that will be the Democratic nominee in the fall. He will take every opportunity to rake Hillary over the coals and Sanders will likely be an accomplice rather than a defender. With the recent Inspector General’s report about ’s email violations, he will even have fresh fodder. While Sanders will probably not deal with ’s personal issues, he will be right there with other issues such as exchanging money for access, the war, and international trade deals.  Both candidates will make it look obvious that Hillary is just wrong about too many issues.  In addition, he will easily be able to refer to as being not smart enough to take advantage of this debate and perhaps paint her as a coward for not being brave enough to face him or Sanders.

3. By raising money for organizations dealing with women’s health, he capitalizes on the female demographic where some are still sitting on the fence about Trump.  Many Republican women do not like Trump, but dislike as well.  Trump may help to sway a portion that is just plain undecided. It is just good public relations.

4. Perhaps the most genius aspect of the debate deal for Trump is that he will have the opportunity speak directly to Bernie supporters.  He knows that if Bernie loses the nomination, the last thing they will WANT to do is support .  Trump can slyly court a practically captive audience and attempt to give them another option.  For this to work, he will have to stress the issues on which they both agree ( war, trade, and campaign finance, etc.).  In order for this to work, he will have to resist his normally callous attacks and keep his eye on the prize.  If he does this and emphasizes his anti-establishment persona, he may steal a few – especially the “Never Hillary” crowd.  I have heard many “Bernie or Bust” people say that it would serve the DNC right if Trump gets elected.  Some even think it is the only way the Bernie revolution can survive if Sanders doesn’t get the nomination.  Being “not that bad,” may capitalize on that spirit and pick up a few more votes.

At this point, there is no reason to underestimate Donald Trump.  Whenever he gets accused of doing something stupid or unwise, it ends up working in his favor.  For the above reasons, the Bernie debate strategy is very impressive. He will do what he does best which is infuse himself into the front of the news coverage while Hillary looks like an ineffective spectator in the back of the auditorium. What makes stealing the media here particularly a bonus is that he is coming into what normally would be considered a media dead spot for a candidate.  He is already the presumptive nominee.  He has little to do to make news until the convention in July – other than picking a running mate.  It would be hard to do that for two solid months.

However, to make this strategy work, he will have to remain disciplined throughout the process and keep his mind on the bigger prize – November.  If he gets to aggressive with Sanders, he will alienate Bernie’s followers and defeat his strategy.   The only thing that will stop a windfall for Trump is that he isn’t brave enough to go through with it or disciplined enough to execute it.  However, it has usually been a mistake to bet against Trump.
at 5:22:00 PM