The United Mine Workers of America and other labor unions were in full force - along with various organizations, activists, and concerned citizens - at a rally in Washington last week. They were there to press Congress to honor its 70 year old commitment.  A promise was made by the government in 1946 to always protect miner and retiree benefits. The details can be found in part one of the this series.

I was invited to ride along on a bus with a group from on the 1470 mile round trip.  People from different unions and other backgrounds made the trip to support the miners who stand to lose quite a bit.

Tina McCormick, who is the daughter of a miner - and a candidate
for the office of Henderson County Judge Executive - was aboard the bus as it headed towards the capital.  McCormick made an interesting choice to sign on to the trip. She decided to take three days away from her campaign to support the cause.

“This is an issue that affects a lot of lives in our area,” said McCormick.  “I just want the miners and retirees to know that we in will do more than give lip service.  We will actually stand with them.” 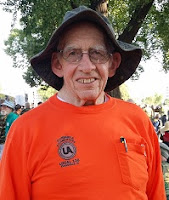 Ed Mellor also decided to support the miners.  At 82, he didn’t hesitate to climb aboard the bound bus.  Mellor, a member of the Plumbers and Pipefitters union from Evansville, IN, is proud to fight alongside his union brothers of the UMWA.

“The union has been a blessing to me,” Mellor said. “I thank God for it.  Without the benefits the union got for us, I don’t know where I would be.  That is why it is important to stand in solidarity with all the unions.”

As Jackie Condor illustrates, one doesn’t have to be a member of a union to realize the importance of supporting the UMWA at the rally. She is a retired nurse with an activist’s heart.  Condor is proud that her grandfather was a miner under John L. Lewis.  Lewis was the president of the UMWA from 1920-1960 who negotiated the “the romise” from the federal government that now is in jeopardy.

“I want to be a part of helping people,” Condor said. “We cannot change this country till we all pull together 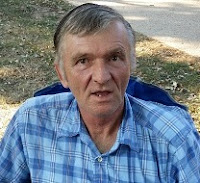 For Greg King, the concern over the loss of benefits could be a matter of life or death.  He depends on those benefits now that he has been disabled from an accident while working in the mines.  If the benefits discontinue, he will not be able bear the cost of his meds for himself and his wife. King is heartened to see the diversity of people taking up the cause.

“I’m tickled to death to see folks from all walks of life standing up with us,” he said. “It shows everyone is concerned and not just us miners.”

No one had any misconceptions about the trip. They knew it was not going to be a picnic and it wasn’t. We spent most of rally day outside in the heat (with a heat index of about 100 degrees Fahrenheit). There was also a matter of a grueling 30 hour bus ride on a trip that lasted only three days from start to finish.  However, I didn’t see any complaints on the journey.  I only saw people rising up for a cause and enjoying the opportunity to spend time with others that were likeminded.  The group saw the importance of fighting to make sure that the government that represents all of us stands by its promises to each of us.
at 2:33:00 PM