I have been putting off this post because it has probably been the most difficult piece to write. This election illustrates how dire our situation is in the United States. With this cast of characters running for the highest office in the land, the future looks bleak no matter what happens on election day.

First, allow me to define the term according to
the Merriam-Webster Dictionary: 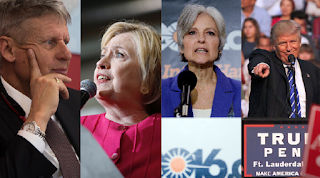 Endorse:  to approve openly <endorse an idea>; especially :  to express support or approval of publicly and definitely <endorse a mayoral candidate>

Keep that definition in mind as we go through the candidates.  I will cover each one in reverse order of popularity as measured by the Real Clear Politics composite poll.

Jill Stein (Green Party) - Stein has no relevant experience in governing - especially for a national office.  She has run for president twice (2012, and presently), governor of Massachusetts twice, and has also ran for other down ballot offices.

Stein’s platform is basically the same one that Bernie Sanders ran on in the Democratic Primary.  In fact, she requested that Sanders become the Green Party candidate when he fell short of getting the nomination.  I have no issues with Stein’s platform as I endorsed Sanders in that primary because of his platform.

The negatives that Stein brings to the table are inexperience and judgment. She hasn’t held any public office of note and starting out as POTUS is an example of one's dreams outreaching one's arm span.  That concept paints this candidate as kooky among other adjectives in that vein. In addition, her selection of Ajamu Baraka shows poor judgment. Baraka is a controversial figure who has said a lot of things that are not conducive to running for office. He is a drag on the ticket and encourages people to not take the ticket seriously.

Gary Johnson (Libertarian) - Johnson has relevant experience.  He was governor of New Mexico as a Republican. He has also run for president twice as the Libertarian candidate (this year and in 2012).

Although Johnson is a Libertarian; he is also a corporatist. Other than personal liberty issues, he tends to remain Republican in his fiscal policies.

The problem with Johnson is he doesn't come off like a serious candidate.  His pro marijuana stance is so well known it is associated with his personal choices.  He is practically the Bill Maher of the presidential candidates.  He doesn't seem to know or to be interested in knowing basic world happenings like “What is Aleppo?”  In addition, his running mate, former Massachusetts governor, William Weld has already shown support for Hillary Clinton.  Ron Paul, probably the most popular Libertarian in the country, chose to endorse Jill Stein over Johnson, if that tells you anything.

Donald Trump (Republican) - Trump has no experience in public office and is proud of that fact.  He touts his business acumen and deal making as being some of his positive points. His biggest positive, however, is that he presents himself as being anti-establishment.

I am not going to get into a lot of details on Trump’s policies for a couple of reasons. For one, he doesn't have a lot of details other than he is going to “make America great again.” His methodology for doing that is a little cloudy but he insists that we should just trust him to do it.  He does promise to secure the border by building a wall and also to cut taxes.  He vows to bring industry back to the country by threatening tariffs.

Trump’s negatives are almost too many to mention.  He lacks transparency as he is the first president in recent history to refuse to release his tax returns.  He has alienated Mexicans, Muslims, and women.  He is charged with horrendous deeds by women and has also made money off scams such as Trump University.  Pardon me now while I sigh.

Hillary Clinton (Democrat) - Clinton is obviously the most qualified when looking at all the candidates' resumes. Her experience in the executive branch as first lady is unlike any other first lady we have had since Eleanor Roosevelt.  She actually worked on policy, namely health care. She also has legislative experience as a popular senator from New York.  Finally, she has foreign policy experience as secretary of state for Barack Obama.

Clinton’s original platform is a moderate, corporatist Democratic one.  Since Bernie Sanders worked out his endorsement deal with her, she has adopted about 70% of his policy initiatives that brings her platform to one of the most progressive in history.

Clinton brings a ton of negatives into the contest, however.  She is allegedly involved or associated with a number of scandals.  The first one being her poor judgment in having her own server in her home to do State Department business. The FBI investigation showed extreme carelessness and FBI Director James Comey even revealed her dishonesty as she discussed her emails with the public and to Congress.  In addition, the Clinton Foundation is being investigated for shady dealings - to which Clinton’s State Department may be a party. Also, there is evidence showing that collusion existed between the DNC and the Clinton campaign during the primary. Even more, WIkileaks has released emails that apparently show the Clinton campaign was coordinating with supporting PACs which is illegal.  Double sigh.

On to the Endorsement

Trump’s problems are too big to ignore.  His rhetoric suggests that he will not represent all Americans; that is disqualifying.  The fact that he isn't transparent with his taxes (the first candidate in five decades) and that he has no detailed plan to institute anything we can see as positive change takes him out of serious consideration.

Clinton’s legal problems, trustworthy issues, and lack of good judgment is ALSO disqualifying for her. I went back and forth between Clinton and . . . ANYTHING ELSE (other than Trump) for a long time before making my decision.  It is the reason this endorsement post is so late in the game. However, when playing out the scenarios to their logical conclusions, I have determined that I cannot endorse this candidate.

A Hillary Clinton administration will be bogged down in investigations and hearings for perhaps her entire term. Representative Jason Chaffetz (R) of Utah, the head of the House Oversight Committee, has already stated that there is enough evidence to look into her activities for years - and he is determined to do so.  The reality of that is deterrent enough, but the knowledge (via WikiLeaks and FBI investigations) that there is some legitimacy to these investigations makes it that much worse.  The country doesn't need an administration with this much of an albatross hanging around its neck.

I have heard from a number of people when discussing Clinton’s alleged corruption say that it is just the reality of politics.  However when we support and elect these candidates, we are saying that we care nothing about the integrity of our government.  Wink wink, nudge nudge is not the methodology of a government that is supposed to be a beacon of democracy. Politics is only dirty because we allow it to be.  Count me as one that will no longer be apathetic to a system that represents big money and special interests rather than the people who dutifully exercise their franchise. 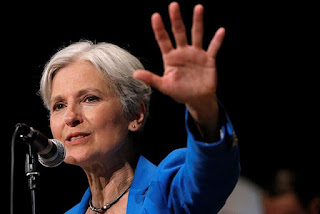 Thus, the only candidate that can possibly be deemed worthy of endorsement is Green Party Candidate, Jill Stein.  Sure, she is short on experience, but that doesn't seem to be a concern to half the country supporting Donald Trump.  While examining both candidates, Stein seems to be much more versed in policy and how government works compared to Trump.

She fails to have anything close to the resume qualifications of Clinton, but she has nowhere near the baggage either.  She has a solid core of values that she puts on the line by actually showing up places where she finds injustice.  Her only legal baggage is a misdemeanor charge against her in North Dakota for standing up against the North Dakota Access Pipeline that threatens to desecrate sacred lands of Native Americans and poison the drinking water - an issue on which Clinton hasn't had the courage to even comment.

Stein is honest and willing to put skin in the game to take the country out of the establishment muck that it is stuck in.  She has virtually the same progressive platform as the Bernie Sanders primary campaign which, in my opinion, puts her on the right side of history.  Her honesty and willingness to commit makes her a newbie president that we can work with. While every president shares the same observation that NOTHING can prepare someone for the presidency, I accept that Stein will happily fit into that scenario.

At the beginning of this piece, I defined the term “endorse” as to "express support or approval of publicly and definitely." I cannot do this for Trump, Clinton, or Johnson. However, I can for Jill Stein.  She isn’t perfect, but she is someone that Americans can be proud of as president.

I don't make any unrealistic assertions that Stein has a chance to pull a big upset in the election. However, there is an additional incentive to vote for Stein (or even Johnson). Enough support for the Green candidate will help take away the monopoly of power by the establishment two-party system. If five percent, or more, of the voters find it impossible to support Clinton or Trump and vote for Jill Stein, it will open up the process to the Green party in the next election. They will be eligible for matching funds which will help get their message out. Presently the two parties, as much as they show complete contempt for each other, collude to orchestrate that the two party system remains. We have seen the disaster that this system has become and we have an amazing opportunity to do something about it. The founding fathers warned us about it; perhaps now is the time we will listen.

There is nothing which I dread so much as a division of the republic into two great parties, each arranged under its leader, and concerting measures in opposition to each other. This, in my humble apprehension, is to be dreaded as the greatest political evil under our Constitution.  --John Adams
at 4:14:00 PM