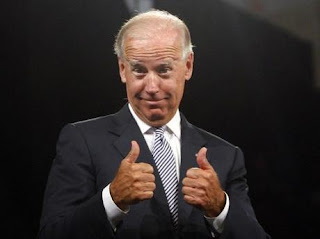 Now that the debates are here, I thought I would produce a series of posts that look at that Democrats applying for the nomination and try to summarize the outlook.  I am not going to predict the winner; that would be naive.  However, I am going to opine on who has the better paths to win.  Of course I am not going to go through all of the candidates because that would take longer than some will be in the race.  However, I will take a look at some that I think will last the longest.  First up, Joe Biden.

Biden is the front runner for a number of reasons - the most obvious is name recognition.  Everyone knows Biden's name because he has been around forever and his most recent gig was vice president for Barack Obama.  I remember that because Biden won't let anyone forget it.  He is always name dropping "Barack" anytime he gets a chance.  I am surprised that he doesn't call him "Barry" at this point.

Advantages:  In addition to name recognition, Biden has the advantage of having the image of bringing normalcy back to the White House.  He is genuinely a nice guy and is a safe, moderate pick for people who have political fatigue. He also has the DNC stamp of approval because he is the darling of the establishment.  That means he will be protected to a certain extent by the mainstream media and will have built-in surrogates every hour on CNN and MSNBC.

Disadvantages:  Nice guys finish last - particularly in this country. Four years, ago at this point in the election process, Jeb Bush was the huge front runner for the Republicans.  He was also a nice guy.

Being the establishment darling and moderate will ensure he will get no support from a faction of the party. He is seen by some as the Hilary of 2020 and that leaves a bad taste for those that feel like Bernie Sanders got hosed.

Biden is also a gaffe machine.  He will, undoubtedly, say some things that he should not.

He is also dealing with old baggage.  He has been on the wrong side of things that have the woke Democrats up in arms.  He wasn't very accommodating to Anita Hill during the Clarence Thomas hearings. In addition, he earned a reputation of being pretty handsy.  He was also an architect of the controversial Violent Crime Control and Law Enforcement Act of 1994 which has earned the ire of the African American community.

In addition, Biden has to carry the baggage of being an old white guy.  In this election season, it is perfectly acceptable to hold age, race, and sex against an individual as long as it is elderly, male, and white.  That isn't to say that white males haven't had a power lock on positions of political power that must be addressed; I am merely speaking of how it will affect individuals in this particular election - for right or for wrong.

Outlook: Although Biden looks strong in the polls now, like Jeb Bush did, it is a long shot in my mind that he can take this LONG campaign wire to wire.  People have short attention spans and they are going to jump to the next shiny thing sooner or later because they get bored easily. The front runner is the big target and Biden will take a beating from other Dems and Trump.

Biden's only hope is to parlay political fatigue, establishment coddling, and his "nice guy-ness" to the nomination.  He must hope that a lot of people will latch on to him and tune out of the election process due to fatigue.  If the establishment dems and media come to his defense like they have so far when he is attacked, that will help establish him as a sympathetic candidate and also allow him to hold on to freshness.
at 6:11:00 AM