Pelosi, and Trump do the Impeachment Dance to the Mueller Orchestra

THE AFTERMATH OF THE MUELLER TESTIMONY 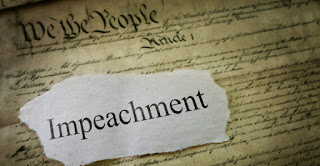 Impeachment is unlikely. Nancy Pelosi doesn't have the stomach for it. She thinks it is a bad political move and she is probably correct because people will not read the Mueller Report. Mueller's congressional testimony didn't help much either because it was dry and Americans tend to have the attention span of gnats. They are now and will continue to be - at least during this administration, an uninformed people.

Americans are tribal and no one will hear anything that is bad for the their tribe. It is true to a certain extent for Dems, but it is even worse for Trump Republicans. For that bunch, there are only two types of information: pro Trump facts, or fake news.

However, RELATION STATE thinks the impeachment inquiry must go on anyway. If Pelosi and the Dems are making decisions totally based on politics, then they have no claim to the ethical high road any more than Trump and the Republicans. The Congress is there to safeguard the country and fulfill their Constitutional duty of checks and balances. If they allow Trump to be above the law because of a fear of political consequence, then they are complicit in the corruption.

Seldom are there situations where the ends justify the means and this is definitely not one of those times. If we allow the Constitution to fail, then what do we really have?

Therefore, Pelosi and the House should take up impeachment inquiry and reveal to the world whatever grounds there are for impeachment. The Mueller Report suggests that there are plenty. They cannot fear that it will fall on deaf ears in the other chamber. If the senate does not convict, then that is on Mitch McConnell and the senate Republicans to wear the mantle of corruptness. They can't wear it if the House keeps it for themselves.
at 5:22:00 PM