Maybe we don't like our insurance companies after all.


There has arisen a great debate in this country concerning the role insurance companies should have in health care in the United States. Progressives like Bernie Sanders and Elizabeth Warren insist that they have no place while conservatives and moderate De
mocrats want them to be pivotal in care. However, because they are for-profit corporations, the goal of insurance companies is to maximize profits in order to keep their shareholders happy. To accomplish that, they find ways to deny care or payment of care to their customers. Therein lies the inherent conflict of interest.

I could spend a lot of space showing example after example of how health insurance companies have denied care because of built-in excuses they have in the fine print of their policies and the unethical schemes they use to utilize that fine print. However, that isn’t the aim for this piece.

It should be known that health insurance isn’t the only product that companies use to routinely bilk their customers. Emily Suess can testify to that. She has been battling Lincoln Financial Group (LFG) to get them to honor their commitment to provide her benefit. She bought in good faith a long term disability insurance policy from them when she was well enough to work. However, LFG has determined that instead of giving her that benefit, she should return to work now despite her debilitating and inoperable, malignant, brain tumor.

Emily was hired as a writer for Wolfram Research in Champaign, IL in 2013. As part of her benefits package, she thought it wise to purchase a supplemental policy that would cover long term disability. Her husband, Dan, is disabled which made Emily the sole breadwinner. She thought the wise and responsible thing to do was to buy disability insurance just in case something unthinkable should arise. She knew it would be devastating for her and Dan if she was forced to give up working because of an accident or health issue. She bought that policy not only to safeguard her finances, but also to give her peace of mind. As it turned out, it gave her neither.

A little over a year after purchase of that policy, Emily began to experience gait abnormalities, vertigo, and dizziness. She started to fall a lot. She also started suffering from fatigue, chronic generalized pain, insomnia, IBS and other digestive issues. For the next three years, she was jerked around by one doctor or facility after another . That could fill an article by itself. However, let’s just say after being told everything from fibromyalgia, psychosomatic problems, and possibly multiple sclerosis, she was ultimately diagnosed with a malignant brain tumor - an astrocytoma. 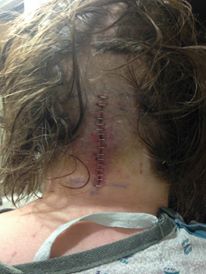 As soon as she started to receive her checks from LFG, she was urged - even coerced by LFG to obtain the Social Security Disability Insurance (SSDI) benefit. This was important to LFG because the policy allowed them to subtract the amount of the SSDI from their payout (which is a common stipulation in long term disability policies). Since Emily received her SSDI briefly after application, LFG was able to cut her benefit by the amount of her SSDI check. However, that wasn’t enough for LFG; they were hell bent on not paying Emily anything at all. “Other companies do it to.” Emily told RS - referring to the cutting of her benefit in lieu of SSDI, “I mean, they already get out of paying so much when you make a claim that it is just disgusting when they cancel on you altogether and don’t have to pay anything.”

That is exactly what happened. After 24 months, LFG re-evaluated Emily’s disability and proclaimed her able to go back to work. Bear in mind there is still a tumor on her brain stem and her symptoms have not changed. So how did LFG justify cutting Emily off from her benefits? They found a ringer.

In order for LFG to be able to take away someone’s benefit, they have to find an expert to claim that the policy holder can return to work, thus getting LFG off the hook. It just so happens that LFG has such an expert that they are sure will not let them down. Dr. Lee Hartner, an oncologist for Penn Medicine, went to work on the insurance company’s behalf.

It would be easy to assume that LFG would insist that Emily be examined by THEIR doctor (Hartner) so that he could soft soap a five minute examination and then tell LFG what they paid him to hear. However, LFG and Hartner did nothing even that ethical. Instead, Hartner apparently looked over a few tests, reviewed some literature about astrocytomas, and gave her a clean bill of health.

Emily stated that this wasn’t an isolated case for Hartner. He has apparently, based on her research, ruined other cancer patients’ lives with his company line assessment in order to benefit insurance companies which is his gravy train.This incenses Emily, “It disgusts me that he treats cancer patients (in his regular practice).”

LFG quickly cut off her benefit despite the fact that none of her symptoms had dissipated or even improved. This forced Emily and Dan to try to live on roughly 30% of her previous salary. Due to circumstances beyond her control, Emily went from being a professional writer making a decent living for her family, to a disabled woman worried about keeping a roof over her head and food on the table - on top of dealing with her debilitating condition that caused her pain and physical dysfunction. All this despite doing the responsible thing of buying insurance to prevent this very circumstance.

Emily is now on her second appeal after being denied the first one. She and Dan are hoping beyond hope that somehow she will win this time and have the necessary portion of her income restored - the portion she bought and paid for. She has also started a Patreon page where people can help. “I do still get SSDI. There’s never been a question with the Social Security Administration as to my disability. It is not enough to get by without the benefits from the Lincoln Financial policy.”

Emily’s struggle with LFG has opened her eyes to the corruption that is part of the M.O. of insurance companies - especially those that deal with health and disability. She stated that she would like to see major changes in how people are treated by insurance companies such as LFG. “I’d like to see the system dismantled. I don’t care about (LFG) as an individual company. The people who work for them and prop up this system need to be called out. I’ve contacted my members of Congress, tried to tell the world. I’m not some poor soul who was in the wrong place at the wrong time. This system is how they want it -- FOR EVERYONE! I just want people to know that and think about it before they sink their hard earned money into it.”

Emily would, at least, like to see doctors be subject to additional regulations when they engage in this type of chicanery, “I want to make the doctors disclose this stuff the way they have to disclose taking money from pharma. I will die trying to make that happen.”

As mentioned Emily has started a Patreon page for people who are interested in helping out. They get the benefit of reading her memoir chapter by chapter as it comes out and it also has zentangles, a form of meditative design and pattern drawing. You can check out her page at patreon.com/emilysuess. You can also help Emily with your Paypal account at paypal.me/emilysuess. Emily also has her web site (emilysuess.com) to keep people up to date with her situation and other important issues around her life.

Emily asks for those who want to help stop this type of abuse to share their story and vote for people who represent real constituents, not corporate donors. Most of all, she urges everyone to not give their money to Lincoln Financial Group.
at 4:45:00 PM