Back in 2016, Relation State refused to endorse Hillary Clinton.  The Democratic National Committee along with the Clinton Campaign had demonstrated that they were corrupt as they were in cahoots to coronate Clinton as the nominee come hell or high water.. The DNC was even sued for fraud.

Endorsing Donald Trump was a non-starter. RS knew that he would be an embarrassment to the country with his juvenile petulance and his obvious ignorance of how government actually works.

While staring at a binary choice, Hillary was the better of the two evils. RS is not totally averse to endorsing with prejudice the candidate that is the lesser of two evils, but exposed corruption is a deal breaker.  Therefore, Relation State was forced to endorse third party candidate, Jill Stein.  Stein was the least of the three evils, but at least she wasn't guilty of corruption.

One thing that we miscalculated was the courage and integrity of the Republican Party.  We figured that even if Donald Trump won, party leaders would keep him in check because they would want to preserve the dignity and reputation of the party. Since Trump would be the most unpopular president in recent history, according to the polls, the party would want to keep their distance. We. Were. Wrong.

The GOP became the party of the sycophant.  People who disparaged Trump and knew that he was bad news, suddenly sang his praises out of fear that he would tweet his displeasure at them and encourage someone to primary them.


"We need a commander in chief, not a Twitterer-in-chief. ... I don't know anyone who would be comfortable with someone who behaves this way having his finger on the button. I mean, we're liable to wake up one morning, and Donald, if he were president, would have nuked Denmark."

"While pundits obsessed over tweets, he worked with Congress to cut taxes for struggling families. While wealthy celebrities announced that they would flee the country, he fought to bring back jobs and industries to our shores. While talking heads predicted Armageddon, President Trump’s strong stand against North Korea put Kim Jong Un back on his heels." 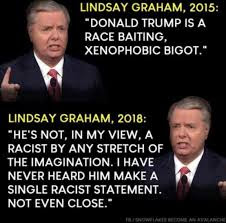 Finally, SOME Republicans have realized that the deal they made with the devil has a cost.  Trump buddy, Anthony Scaramucci finally had enough of the nonsense and has publicly stated that Trump has to be defeated.  However, the guy that is turning the most heads these days is Tea Party member and FORMER demagogue Joe Walsh who announced his candidacy for the Republican nomination for president against Donald Trump on This Week with George Stephanopoulis..

Walsh did something that Trump would or could never do - own his mistakes.  He stated that he had a "come to Jesus" moment and realized that his positions demonizing his political adversaries were wrong. He took responsibility for paving the way for Trump and has pledged to hammer the president everyday to remove the power from the bully he states that he helped put there.

Walsh may not be the only Republican opposing Trump in the primary.  Former Massachusetts governor, Bill Weld is in and former South Carolina governor and congressman Mark Sanford is expected to announce his candidacy.  Neither has attacked Trump's character in the way that Walsh has.  Sanford indicates that his main issue will be fiscal responsibility and that has been the source of his opposition of Trump.Weld mentions both policy and character, but  Walsh makes no bones about his attacks.  He is running on the idea that Trump is unfit to be president..

While Relation State does not embrace Walsh's politics, we do endorse his courage and his new found conscience.  We will not ask anyone to vote for Walsh, but we would not be averse to our readers writing a check to his campaign.
at 2:56:00 PM