Establishment Dems are Blaming the Wrong People for Tarnishing Obama 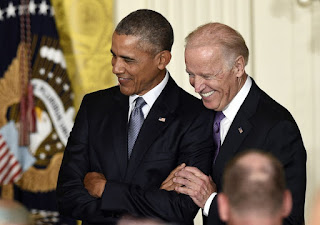 On every news channel, the mantra has been.  The Democratic candidates are offensive.  How dare they tarnish the legacy of the great Barack Obama! I agree to a point.  Obama was a president that unified the party and blazed a couple of trails that were previously too tough to venture.  However, their ire is pointed at the wrong people.  This unfortunate turn of events should be pinned on Joe Biden and his campaign and perhaps they need to look into the mirror.

One of the worst aspects of street fights is that innocents get hurt. When people find themselves in the wrong place at the wrong time, they stumble into harm's way.  However, when one of the combatants use an innocent as a shield, then where does most of the responsibility lie?

Biden has used the "Barack and I" line so much, that I am just waiting to hear about some mole President Obama has on his body that only Biden (and perhaps Michelle) knows about. This notion that Biden can use Obama's name as a magic word where no one is allowed to touch him, isn't going to fly. One of the lessons that should have been learned in 2016 was that when you try to coronate someone before the nomination process, it doesn't end well.  Therefore, no magic words allowed!

All candidates have to run on their records and no one's should be exempt.  It is arguable that a policy that may be undesirable now was understandable in context when it was enacted.  As far as that applying the Obama administration, that is up to Biden to clear up, not his opponents.  If  Joe Biden is going to invoke Obama's name, then he has to be the one to protect it.  Biden has to have a better defense of his and his soul mate's decisions than, "I can't believe you went there!"

The Democratic party isn't getting any help from the mainstream media either.  The establishment news channels fume about how the Dem candidates are giving fodder to Trump to justify his attacks on Obama.  They are wrong; the media is the one doing that.  Our TV bug of a president doesn't have original ideas.  He gets all his ideas from television. Can you guess who already used that info at his rally in Cincinnati?

Logic tells us that before we can pin blame on Cory Booker or Kamala Harris for hurting Obama's legacy, we have to get through Biden and the media first. However, I don't expect a light bulb moment to happen to either of those players.
at 7:01:00 AM