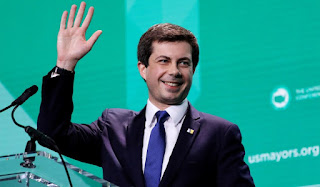 When a candidate is already looking to capitalize on a system that short circuits the democratic process, you have to wonder if there is a hidden ethical problem.

For those who don't know, the superdelegates do not vote until the second ballot in 2020 if necessary. Unless the field is pared down quite a bit when the voting starts, a second ballot is going to happen. If you remember 2016, it was the superdelegates that gave Bernie Sanders too much of an uphill battle to win the nomination. They are party insiders that favor establishment candidates that have their hand in the corporate till which buys influence with politicians. A simple check of Buttigieg's contributors (compliments of Open Secrets), we already see that he is immersed in corporate money.

When the loudest messages on the campaign come from Elizabeth Warren and Bernie Sanders, there will be trouble if there is an establishment takeover on the second ballot. It will cause a rebellion with the progressive wing of the party because the message from Warren and Sanders is that the corporate establishment is corrupt.

The establishment took over to a certain extent in 2016, and we got Donald Trump. If it happens again, get ready for four more years of ridiculous tweets and xenophobic policy.

Conventional wisdom says that the superdelegates will not pick Buttigieg this time. They will court Elizabeth Warren instead. She has been known to play ball with the establishment from time to time and would be more likely to spark a rebellion. They certainly aren't going to pick Bernie Sanders. They might have to settle for Bernie light.  In the meantime, Buttigieg is showing some colors that a lot of voters aren't fond of.
at 1:58:00 PM